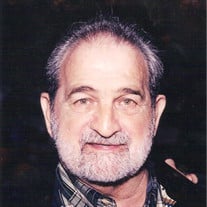 Daniel Gaeta May 9, 1942 - July 21, 2020 It is with great sadness that we announce that our beloved Danny (Dan) Gaeta passed away early Tuesday morning, July 21, 2020 at 12:08 a.m. surrounded by his loving family at home. Danny was born in Utica, New York on May 9, 1942 and was the son of Veronica Chambrone Gaeta Talbot and Michael Gaeta. He attended Utica Academy until he entered the United States Navy at the age of 17. Danny served in the U.S. Navy for 13 years aboard the following ships: U.S.S. Virgil, U.S.S. Franklin D. Roosevelt, U.S.S. Valley Forge, and the U.S.S. Nitro. While in the Navy Danny completed 4 tours in Vietnam. He earned Good Conduct Medals, The National Defense Service Medal and the Vietnam Service Medal Silver Star during his years of service. At the end of his 13 years of service, he received an Honorable Discharge from the U.S. Navy. Following his naval service, he spent some time in the retail business before accepting a position at Home Depot where he worked for 38 years until his passing. Danny is survived by his wife of 49 years, Jean Gaeta. His other survivors include his 2 daughters Jackqueline Gaeta of California and Michele Thayer (and her husband Mark) of Oregon, 3 stepchildren for the past 49 years, Karen Chindanusorn (and her husband Tom), Kenneth Parker, and Douglas Parker, all of Tampa, Florida. He was a grandfather to his daughter Jackqueline's children- Danielle, Darius, Candice, and Josh: Michele's children- Britney, Breanna, and Janelle: Karen's daughter Tammy (and her husband Otto) and stepson Kenny's son Kenny II. He was a great -grandfather to RaeLyn, Elijah, Emma, Greyson, Cayden, Abbi, Johnny, Kenny III, and Clayton. Daniel is also survived by several nieces and nephews. He leaves behind many close friends and colleagues that he shared many great memories with over the years. His granddaughter, Tammy, has been the "Apple of his Eye" since she got off the plane from California arriving in Tampa, FL when she was 5 weeks old being carried in the arms of her Nan. She graduated from the University of Florida which turned her grandpa into an avid "Gators" fan. Tammy's son Cayden was his Gramps' special boy. His grandson, Kenny II, held a special place in his heart and shared his grandpa's love of fishing. Danny was well loved by all and we will miss him everyday for the rest of our lives. The family would like to extend their sincere appreciation for the compassion and support that Dr. M. Nandyala, M.D. provided to them during Danny's illness. Services will be held on Wednesday, July 29, 2020 at Trinity Funeral Home and Memorial Gardens, 12609 Memorial Drive, Trinity, FL 34655, (813) 920-4241. 11:30 a.m. Family visitation with friends 12:00 noon Funeral Service...Immediately following the service, we will proceed to the graveside for Military Honors

The family of Daniel Gaeta created this Life Tributes page to make it easy to share your memories.

It is with great sadness...

Send flowers to the Gaeta family.