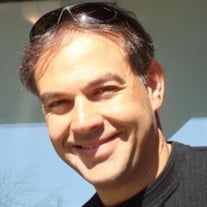 In Loving Memory of Dale Henry Bohannon August 30, 1965 - October 16, 2021 It is with deepest sadness that we announce the sudden, unexpected death of Dale Henry Bohannon, age 56, of Tampa, Florida. Throughout his life, Dale was a loving and dedicated son, brother, husband, and father. He is survived by Melody Bohannon, love-of-his-life and wife of 27 years, and three wonderful children, Serena, age 22, Sienna, age 19, and Justin, age 12. His parents, Douglas and Annette Bohannon, and sisters, Laura Bohannon-Myers and Tina Bohannon-Bean. Dale was a graduate of Jesuit High School and Southern Methodist University. When he wasn’t working as a Realtor in the Tampa Bay Area, Dale could be found beside his family cheering for his son at hockey games, spending quality time in the yard, watching movies, attending Lightening games, going on dates with his wife, walking the family dog, or taking the family on an adventure. Dale was known for his sense of humor and creativity. His relationship with his family was filled with silliness and laughter. A founding member of his family’s “Chip buddy club,” Dale frequently convened secret meetings with his children to debate which type of potato chips were to be initiated into the club — a very serious matter in the Bohannon household. This was just one example of the creative fun Dale brought to his family. His parents and sister, Laura, were lucky enough to work with him in Real Estate. Every morning, without exception, Dale would come into each of their offices, give them hugs and make sure they knew how much he loved them. He lit up when he saw his beautiful wife, Melody, and she with him. They’d enjoy their evenings on the patio holding hands as they sat in their chairs watching their children play. Dale’s family was his entire world... and he was ours. He will be forever missed. Without warning, on Saturday, October 16, 2021, Dale left us by way of a massive heart attack. May he rest in peace forever. In lieu of flowers, please consider donating to the Go Fund Me set up for his wife and three children https://gofund.me/9bf96385

The family of Dale Henry Bohannnon created this Life Tributes page to make it easy to share your memories.

Send flowers to the Bohannnon family.