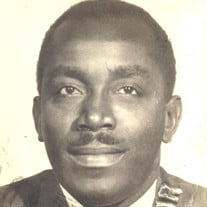 Celebrating the Life of Charles Julien “Charly” 1928 – 2021 On April 1, 2021, Charles Julien was taken up by the Lord peacefully as his mission here was complete. He passed during Holy Week, how symbolic! Charles, son of deceased Antoine Julien and Mariella Charles, is lovingly remembered by 5 children Marlene and spouse Richard Fish, Carolle, Charlot, Francoise and spouse Jean Paulhand Carre, Charlene and spouse Ravi Bhatt; 11 grandchildren Clarelle , Carl, Cathya, Jennifer, Elizabeth, Nathalie, Francoise (Franni), Carinne, Paul, Philipp, Kyle; 9 greatgrandchildren Carah, Coy, Chase, Chloe, Cael, Matthieu, Sebastien, Priya, Rohan; by his adoptive daughter and family; his brother and family, and other numerous nephews and nieces. He grew up in Rivière Froide, an outskirt of Port-au-Prince. He relocated in his teen to work at a Family-owned textile business in Port-au-Prince, and pursued a political career. He enjoyed weight lifting and represented Haiti in a competition in Panama as a professional weight lifter. He migrated to the United States of America and lived in Brooklyn NY. He later moved to Summerville Massachusetts where he retired as a General Manager of the Housing Department at the age of 71. In 2008 Charles joined his children, grandchildren and greatgrandchildren in the State of Florida where his journey peacefully ended. Charles was very happy, and fulfilled. He was loved by everyone who surrounded him. Charles never parted with his culture especially those back in the days musics to include and not limited to Nemours Jean Baptiste, Webert Sicot, Septentrional, Jaz Des Jeunes, Skasha etc. Also, a lover of Spanish musics, language he self-taught. He is leaving behind tons of old discs he brought with him from his home land. Given these challenging times, the family has chosen to have a social distancing service and live streaming for those who will not be able to be present. There will be a viewing on Saturday April 10, 2021 from 12:00pm to 2:00pm, followed by a service and a Eulogy. Link to live stream: https://view.oneroomstreaming.com/authorise.php?k=1617346155550722

The family of Charles J. Julien created this Life Tributes page to make it easy to share your memories.

Send flowers to the Julien family.