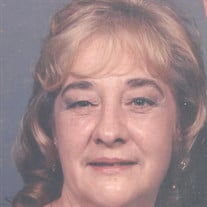 Belinda Lee (Ely) Malkemus 8/16/1938 – 9/10/2019 Belinda died peacefully in her sleep from cardiovascular disease September 10, 2019 at her home in Green Bay, WI. She was 81. Born August 16, 1938 in Johnson, NY to Levi and Anna (Dixon) Ely. Graduated from Vestal High School Vestal, NY. Belinda married Roger Johnson and had 3 sons; Roger, Michael and John and lived in Vestal, NY. They eventually moved to Downers Grove, IL where they lived until her sons graduated from high school. Belinda was a realtor for many years until the day she died. She was also an Amway dealer. She moved to Tampa, FL where she met and eventually married Norman “Charlie” Malkemus. Charlie died in 2013. Belinda’s hobbies were reading her Bible, oil painting, camping, boating, fishing, dancing, playing guitar and singing. Her religion was Baptist and was a Republican. Belinda was a leg amputee in 2014 and 2017, and a breast cancer survivor. That never stopped her from socializing and having fun. She’d sit outside every morning, no matter the weather, having her coffee and cigarette, and loved her Scotch and water. She liked watching westerns, and listening to country music, especially Johnny Cash. Belinda had a love for her dogs and cats. Her sons Roger (ex-wife Terry) and Michael (Suzanne) were her caregivers in Florida 2013-2017, and John (Janice) in Wisconsin 2017-2019. Belinda moved from Tampa, FL to Green Bay, WI in 2017 to be with her son John. Belinda was cremated in 2019, and her ashes buried September 21, 2021 at her grave next to her husband Charlie at Trinity Memorial Gardens, Garden of Honor Lot 163, B4. Belinda was preceded in death by her husband Norman “Charlie” Malkemus in 2013; ex-husbands Ralph Allent and David Couch; her brothers Kenneth “Kenny” (Emmogene) Ely, and William “Billy” (Sheila) Ely; Sister-in-Law Judy (David) Ely. Belinda is survived by her first husband Roger Johnson, sons Roger, Michael (Suzanne), John (Janice) Johnson; siblings Nancy (Al) Senko, Stanley (Beverly) Ely, David Ely, James “Jimmy” (Jan) Ely, grand- children, great-grandchildren, nieces, nephews, cousins.

The family of Belinda Malkemus created this Life Tributes page to make it easy to share your memories.

Send flowers to the Malkemus family.