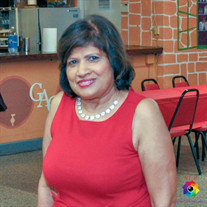 Basmatee Gopee was born on July 24, 1949 to Bissondaye Maharaj and Budram Persaud in Tunapuna, Trinidad. She was the seventh of ten children, 4 boys, Clive, Boysie, Frankie and her youngest brother Suresh and 6 girls, Dolly, Paula, Pinky, Kay and Ursula. A week before her 22nd birthday, she married Prakash Gopee, someone that she attended school with and who lived down the road with her brothers’ consent. He affectionately called her ‘flowers’ a term of endearment that he continued to use even after 49 years of marriage. One year after marriage they welcomed the first of three daughters, Karen. Exactly one year and one week later, Camille was born. That same year, together they immigrated to the United States and New York. Three years later, Khristine was born. Basmatee loved having three daughters and spent tireless hours trying to instill in them the proper values, an appreciation for the Hindu religion and how to maintain a home. She could not wait for grandchildren and was overjoyed to spoil her grandkids Anjali, Krista, Avani, Adam, Andrew and Malina. Basmatee was a true matriarch, setting the example for her kids and grandkids. She enjoyed Bollywood movies, singing and worshipping at her beloved temple Sree Ram Mandir. She had an active life, full of travel, restaurants, family and friends. Basmatee left this world all too suddenly and will be greatly missed. She brought beauty to this world and the world is so much darker without her in it. Rest in peace, to a loyal and devoted wife, a loving mother and proud and adoring grandmother.

The family of Basmatee Gopee created this Life Tributes page to make it easy to share your memories.

Send flowers to the Gopee family.