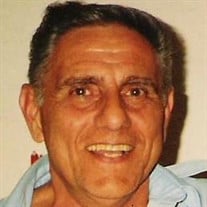 To view live streaming service click link posted below: https://view.oneroomstreaming.com/authorise.php?k=1643252187828948 Anthony D. Curtachio, 86, of New Port Richey, FL passed away on Monday, January 24, 2022 at his residence. Anthony, also known as Sonny and Tony to his friends and family, was born on Staten Island, NY on April 13, 1935. He is preceded in death by his parents, Nicholas and Theresa Curtachio, and his brother Nicholas Jr. He graduated from McKee High School in 1953. He joined the Army and served during the Korean War in Germany, where he managed the Post Office on base. After, he worked for the New York Fire Department for 18 years and at the same time learned his way through the tile business, which became his lifelong business under Tony Tile Inc. He was also an avid baseball fan and spent many days watching baseball games on television. He married Joan Ann Porpora in 1959 and were married for 62 years. He was her everything, she was his. He is survived by his wife Joan, and their children Terry Hoover (Carl), JoAnn Slay (George), Sue Cordova (Ray), Anthony Jr, and grandchildren Geo, Dewey and Dominic Slay, and Kylie, Raymond and Catie Cordova. Also, his sister Grace Pfluger and brother Frank Curtachio, along with many nieces, nephews, family and friends. He will be laid to rest at Trinity Memorial Gardens in Trinity, FL.

The family of Anthony D Curtachio created this Life Tributes page to make it easy to share your memories.

Send flowers to the Curtachio family.