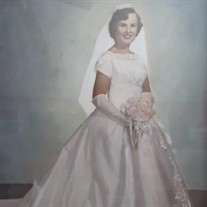 Ann Varik Ashley October 1, 1939 – January 15, 2022 Born in Tallinn, Estonia, Ann spent the first years of her life in Tallinn and on the family farm near Elva. In 1944, as the Soviet army advanced on Tallinn, Ann, brother Rein, and her parents fled to Germany. After spending the next few years in a displaced persons camp in the American Zone, the family emigrated to the United States, initially living in Pulaski, then Syracuse, NY. A graduate of Eastwood High School, Syracuse, in 1957 she met Richard (Dick) Ashley when their churches joined at Centenary following a fire at First United Methodist in downtown Syracuse. On 3 September 1960 Ann and Dick joined their lives together. Soon after they started a family with the birth of Richard (September 1961), Karl (January 1963), and David (December 1968). As her children grew, Ann returned to school, completing her studies to become a Registered Nurse. Her nursing career took her to Loretto Geriatric and Community General Hospital before ultimately retiring from BOCES where she assisted LPN students in their clinical studies. Along the way, leisure time was spent in the service of a number of organizations. After serving as president of the Syracuse Power Squadron Squadronettes (women’s auxiliary), Ann went on to serve as Commander of the Syracuse Sail and Power Squadron. As life often revolved around boats and boating, Ann is also a past Commodore of the Onondaga Yacht Club. In 2005, and again in 2009, Ann and Dick were fortunate to be able to travel to Estonia, only possible after the fall of the Soviet Union. The reintroduction to her homeland brought Ann the joys of meeting relatives and reconnecting with a childhood friend. A life long lover of stitching, knitting, and sewing, Ann became active in the Embroiderers Guild of America after moving to Florida. She could often be found traveling for conventions and meeting with like-minded friends to share in this passion. A long active life, where countless friendships were made, and nurtured, sadly came to end, after complications from pancreatic cancer. Ann passed quietly while in the tender care of Gulfside Hospice in New Port Richey, Florida. Ann was predeceased by her parents Karl and Ina Varik, brother Rein Varik (Ilga), nephew Marcus Varik (Mary), in laws Robert and Ruth Ashley, and brother and sister-in-law Robert and Alice Ashley. She is survived by her husband of 63 years Richard E. Ashley, son Richard Ashley, son Karl Ashley (Kristy), son David Ashley (Kathy), grandchildren Justin Ashley, Jordan (Natasha) Ashley, Jennifer (Jacob) Smiedy, Daniel (Mahpara) Ashley, and three great grandchildren, along with a niece and two nephews. Please, if you are in the Trinity, Florida area on Monday, January 24, 2022, consider joining Dick for an informal time of remembrance for Ann, from 1:00-5:00, Trinity Memorial Gardens, Trinity, Florida. A memorial will be planned for New York at a later date. In lieu of flowers, please consider a donation to Gulfside Hospice, New Port Richey, Florida. https://www.gulfside.org/

Ann Varik Ashley October 1, 1939 &#8211; January 15, 2022 Born in Tallinn, Estonia, Ann spent the first years of her life in Tallinn and on the family farm near Elva. In 1944, as the Soviet army advanced on Tallinn, Ann, brother Rein, and her... View Obituary & Service Information

The family of Ann Ashley created this Life Tributes page to make it easy to share your memories.

Send flowers to the Ashley family.